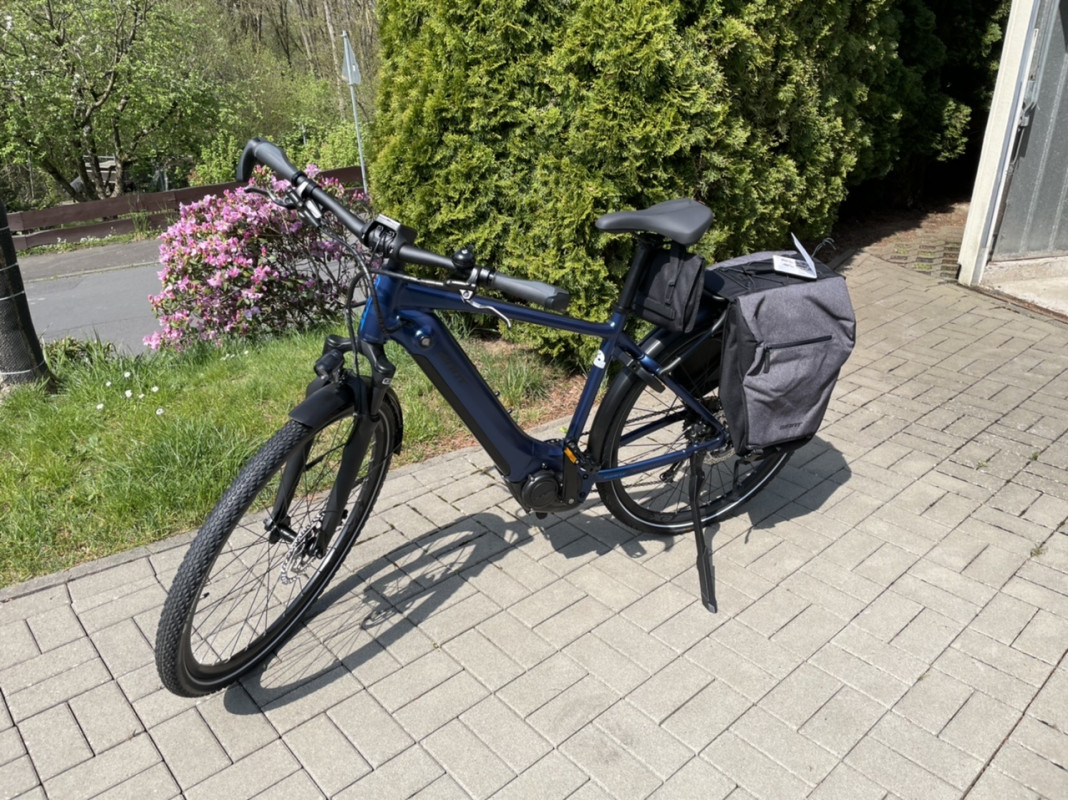 Last week, I received a big box with something that I hoped to buy for a long time. As you might have guessed from the title of the blog post, it was a bike.

Now, I’m not the most active person, especially through the last two-and-a-bit years of pandemic life, so a regular bike was out of the question. I just know myself too well, that I would lose interest if it was not fun to do. And honestly, the main reason for getting a bike is to have some fun. Also, to be flexible for running errands instead of doing everything on foot. But mainly to have fun.

When moving last year, we picked a spot that would allow us to stay car-free. Cars are expensive, bad for the environment, and take up a lot of space. There is a bus stop with hourly service down the street that can get us to the train station that itself is only a 30-minute walk away. The next supermarket is a 10-minute walk away.

I’m very baffled that so many people here are car-dependent, but then I don’t have to go to work as I work from home, and connections can be time-consuming if you go by public transport. Hourly services are just not going to cut it there, and I don’t think there are individuals to blame for it. The whole system of transportation is designed in a way that makes owning a car the easy and cheap option (cheap mostly in time, not necessarily in money).

I thought about many options for allowing us (2 adults) to have some more freedom for moving around. Getting an electric car, I considered. But even leasing it for a couple of hundred Euros a month would be a waste. We just don’t have to travel longer distances that often. Also, there is no way to charge in the garage, so you’d have to go and charge at public chargers every few days. It made any electric vehicle that is impossible to connect in the apartment unattractive.

With a car out of the question, I looked at individual transportation options. And a bike was the natural answer. For getting the two of us to some place, a combination of walk, rail, and taxi would be sufficient.

I had assumed picking a bike was easy, there is not that much variation in bikes, right? Well, wrong.

After seeing Stéphanie Walter’s RAD bike, I got a particular interest in those bikes. They look good and as they also have a cargo option. I was interested in a cargo bike because getting groceries and hurling around other things might be a good use of a bike. Over the weeks, I realized that having a super specialized bike like this would certainly be limiting for general bike hikes. So I waned off the thought of the cargo bike and looked more at general purpose bikes like the RadCity 5 Plus.

There was just this one problem: The payload capacity.

In contrast to non-e-bikes, e-bikes have a stated payload capacity. And for this heavy guy, 125kg just wouldn’t cut it, especially when adding groceries to it. Now, the likeliness of the bike just going kaputt because of this is probably very, very low. And still, I have seen many heavy people ruin bikes because they were not built for them. I did not want to make that mistake with something that was many hundred Euros.

So, my quest to get an “XXL bike”, as they are frequently called in Germany, started. This turned out to be much more complicated and in the end also significantly more expensive than initially planned.

Honestly, the high price point almost made me not buy a bike. Sure, a non-e-bike is a commodity by now, a status that e-bikes generally don’t have yet. And while there seems to be good competition in the space, there seems to be a few price floors that are just hard or impossible to crack.

The bike that I decided in the end, the GIANT Explore E+ 2 (2021), a name that rolls right off the tongue and I totally had no need to look up just now, has some features that I think made the higher price worth for me, in addition to the 156kg weight limit.

Generally the quality of manufacturing in that price class seems to be much higher than on cheaper bikes, for example almost all cables run inside the bike instead of outside of it, which hopefully protect them better from wearing out.

I know that there are no-name brands and probably cheaper options with a similar quality, but the good conscience that you can go to a store and they have probably heard of the GIANT, a literal giant of the industry, is reassuring for me as a first-time e-bike user.

That said, even finding out what different bikes from the same manufacturer had to offer, and what their similarities and differences were, was excruciatingly difficult. All bike manufacturers have convenient comparison functionality but the jargon used just makes it super hard to understand if there is actually a (meaningful?) difference between two features or spec items.

It probably would have cleared up really quickly in an in-person showroom, but trying to buy something online, it felt unnecessarily complicated.

And then there are the bike categories and names themselves: Even inside GIANT, there are different bike types (which makes sense), but then there is a E+ 1 and an E+ 3 version, which have all different numbers of gears and some changes in the displays and UI. From how I understood, the numbers are levels, so 1 is for the most proficient riders and 2 is for medium and 3 is for entry. But I might be very wrong about this.

It does not help that the 2022 and 2021 models are displayed on the website with the same names and very similar images. It took me far too long to figure out that the one with the 200 € cheaper price tag was last year’s model, and a third party site (where I ultimately bought the bike) that stated that there are basically no changes.

First, huge shout out to Zweirad Gollmann who had the bike (and at a slight discount) and after placing the order sent me a message to double check my height fit for the bike, so I would not get a too large or small bike. While I had read up on it before and was confident to have made the right choice, this made me very confident that I had made the right purchase decision.

They even asked if they could put on the lock I bought with the bike, and they did so for free.

The bike arrived a few days after ordering it, setting it up was super easy, just aligning the handlebar and attaching the pedals and off I went. Well, almost. While I had taken the battery for charging when I received the bike, it took about 30 minutes to install software updates.

As I have alluded to above, I did get the previous years model, so I guess newer models come with more recent software that hopefully needs less updates. That said, I could have gone for a ride without installing updates at all, but that is not really how I roll. (Pun intended!) 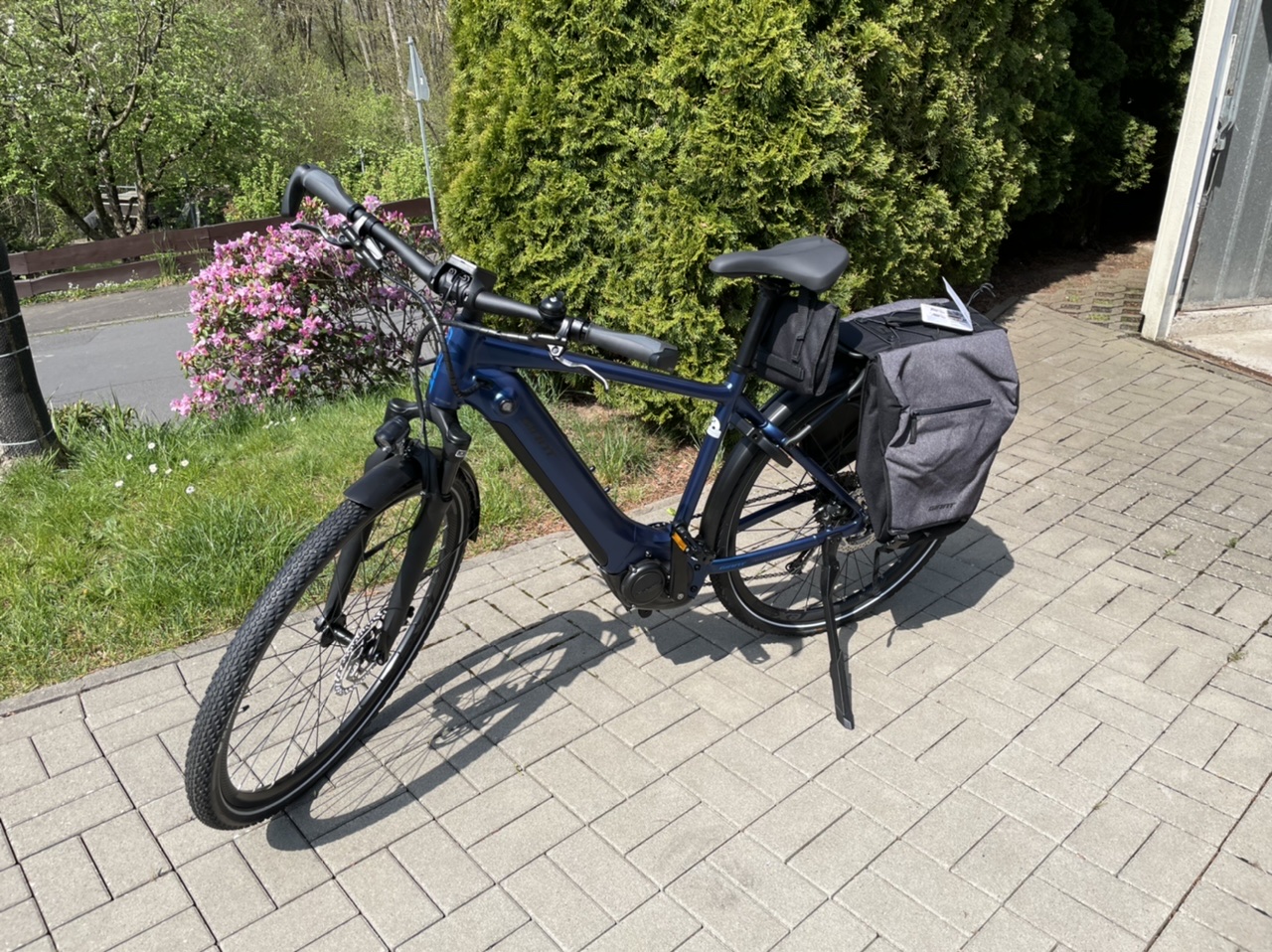 The bike rides wonderfully. I have mostly used the Smart Assist, or Auto, feature which supports you depending on how much you pedal. It feels very natural. Of course, I did try all the different assist modes, and they will be handy in different situations. I also rode on a flat street and switched off assistance completely and the bike still rode well.

Range anxiety is not a problem for me – my rounds are currently about 5km long. One reason is to get used to driving a bike again, getting acquainted with driving on roads (which I basically never did and is only an option here because of the light traffic), and to gradually get fitter. 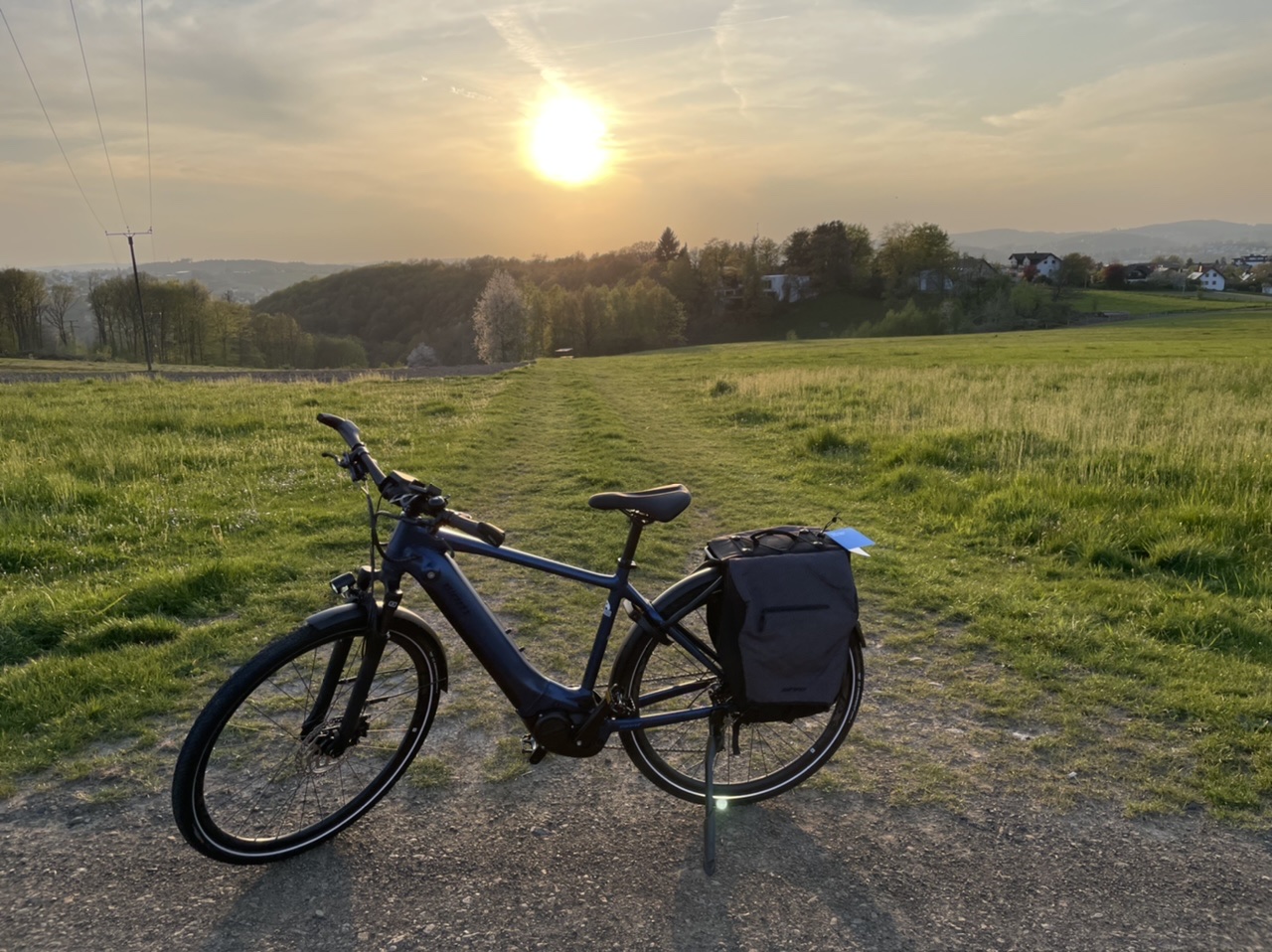 Well, of course there are some. The app and software integration is pretty mediocre. That’s OK, I rather have a great bike (and this is one) with mediocre software than a mediocre bike with great software. What irks me most about the app is that it is only so useful. I can get all information from the bike, like the current battery level, when I’m in bluetooth range and I can also track my rides in the app. But that means that I have to have my phone out and prepped whenever I hop on the bike.

Planning a ride – which I have not done yet – is also only possible while being paired to the bike. As my bike is in my garage (which finally got a use!) and I am not planning my rides in the garage, but in my living room, it is basically a feature that does not exist for me. Depending on bluetooth range to the bike for this functionality is baffling to me.

The app’s view and use of Google Maps is also not too great, there is little bike-level information there and while there are a lot of graphs, none of them seem helpful to me. (But that might be a side-effect of being a novice rider.) It can also only export to Strava, at which point the question is: Why not use Strava directly? The app has a couple of nice features, like detailing how much support you got or how much battery was used.

I enjoyed the detail of the app changing color scheme with the dashboard on the bike when using different assist modes. Eco is green, trekking yellow, and sport red. That is a nice touch.

Also, I felt that I overextended myself during my first longer ride. You just can’t help and get the impression that you are more fit than you actually are while riding, but you still have to put in quite some pedaling work. And without warm-up and pedaling being a way of movement that I have not done for a long time, I was very sore for a couple of days. I probably should have ridden lower gears and/or higher assist, but it felt OK during the ride.

Last, but not least, expect to need a lot of additional accessories. A bike helmet, of course. (If your last one, like mine, sits on a shelf for about 8 years, it is probably a good time to replace it. I certainly did.) I got a handlebar mirror to have some visibility to the back, and how low the handlebars are is probably the biggest drawback of not having a Dutch-style bike, so visibility is still not great. I also got some penniers for the cargo part of the bike. I think they will work well. The bike uses an MIK rack mounting system which makes attaching and removing them very easy. A water bottle mount and a water bottle for hydration is also a must-have.

All in all, I can’t wait getting fitter and steadily increase the radius of where to bike to.

Comments were disabled on this page.